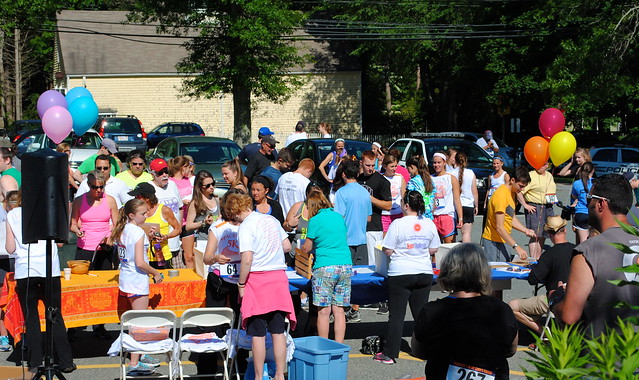 The inaugural Mackenzie’s 5k Race for Crohn’s Disease was held on Father’s Day, 2013 (click here for 2013 Race Results). The weather was gorgeous and more than 400 runners and walkers came out to partake. Another 75 contributors donated online and 15 volunteers manned the registration booths, poured water, directed runners along the route and manned the ‘chutes’ at the finish line, recording times. Our furthest participants came form as far away as Arizona and Minnesota and we were amazed to see that over 75% were not locals but came from all corners of Massachusetts, New England and quite a few from New York. People seem to know a good thing when they see one! We received a lot of comments on how beautiful the route was, passing by historic New England churches, Old Town Hall, idyllic Shawme Pond, with its resident swans and ducks and many spring daffodils and tulips lining the stone-walled neighborhood lots. It was a great beginning, one which we will repeat and even ‘top’ in 2014. Come join the fun.   Thank you to Catherine Balboni for all race photos