My Fight with Crohn’s Disease

I don’t know about you, but I am a believer in silver linings. Everything that is dark has some sort of coloring to it. Every bad situation in life brings some sort of blessing, whether big or small I once did not believe in silver linings until I faced the greatest challenge of my life in the year of 2012. Little did I know, there was a reason it was happening. Let me explain.

My three-year struggle with Crohn’s Disease went undiagnosed for the first two and a half years. It started with emergency abdominal surgery for a burst appendix my junior year of high school. Undiagnosed for two months, the poisons released into my body made me so deathly ill that I received The Anointing of the Sick. I could feel my body slowly slipping away in my hospital bed because I was so deathly ill. I lost an outrageous amount of weight, most of which was muscle, weakening me so much that I needed physical therapy to bring back normal functions such as breathing, walking, and feeding myself. From the ruptured appendix onward, my health was never the same. I always had some sort of pain or abnormal symptom. In total, I have had six surgeries, over fifty procedures and too many needles and hospitalizations to count within the past three years. Because of Crohn’s, I have had to miss many important events in my life; a huge chunk of my junior year, my high school graduation party, important family functions, saying goodbye to a best friend I wouldn’t see for a year, my college freshman orientation, vacation opportunities and more. The hardest thing to miss was my freshman year at Saint Anselm College. During the summer of 2012, I grew incredibly ill and was constantly in and out of the hospital. In July of 2012, doctors diagnosed me with Crohn’s Disease. I was on over twenty pills a day, had a drain in the side of my stomach and could barely stand for more than five minutes. My surgeon said that I was in desperate need of a resection, a surgery in which part of the intestine is removed, but the recovery was a minimum of two months. I knew college was not in my deck of cards, so with a very heavy heart, I decided to take a gap year to focus on my health and to learn about the disease that I would be dealing with for the rest of my life. That was the hardest decision I ever made but the best one as well. Throughout the gap year, I grew so much as a person. Every part of me was tested; my faith, my friendships, my drive, my strength and so much more. I did not want to sit around for the gap year and do nothing, I wanted to make a difference. I wanted to look back at the gap year with a smile and not a frown. That was when I became dedicated to this road race idea. This 5k was literally my savior. I worked on it day in and day out expecting to raise a couple thousand dollars. Never in my wildest dreams did I expect to raise $20,000.00 and have over 400 participants. Proves that you can do anything you set your mind to. I feel so blessed to be treated at Boston Children’s Hospital. I have the most amazing doctors and nurses who treat me like family, especially my in-clinic doctor, Doctor Amit Grover. I don’t know where I’d be without him, he’s my best friend. His dedication to my health is incredible. Not only has my Children’s family been supportive but also so has my family and friends. My parents have been there with me every step of the way and I am eternally grateful for their love. I am currently in remission and enjoying my senior year at Saint Anselm College! There is not a day that goes by where I am not appreciative of my good health. Although I am a full-time college student, I am not allowing that to stop this 5k from becoming an annual tradition. This year is going to be bigger and better than last year. The gap year happened so that this 5k could happen. I have the opportunity to find a cure for 1.4 million suffering Americans and I feel so blessed that I was granted this opportunity. Thank you to everyone who has helped to make this dream a reality. It was a day I will never forget.

I want to thank you for taking the time to read my story. I hope to see you at the 5k! Remember; always believe in the silver lining. See you at the race! xo

“Everyone deserves a life time of good health
and that’s what I’m trying to do here.” 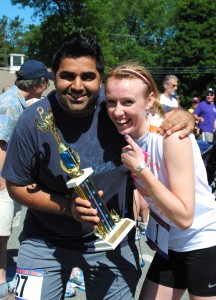 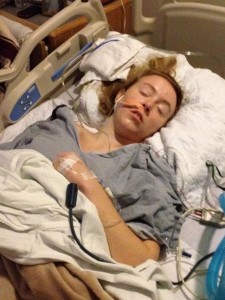